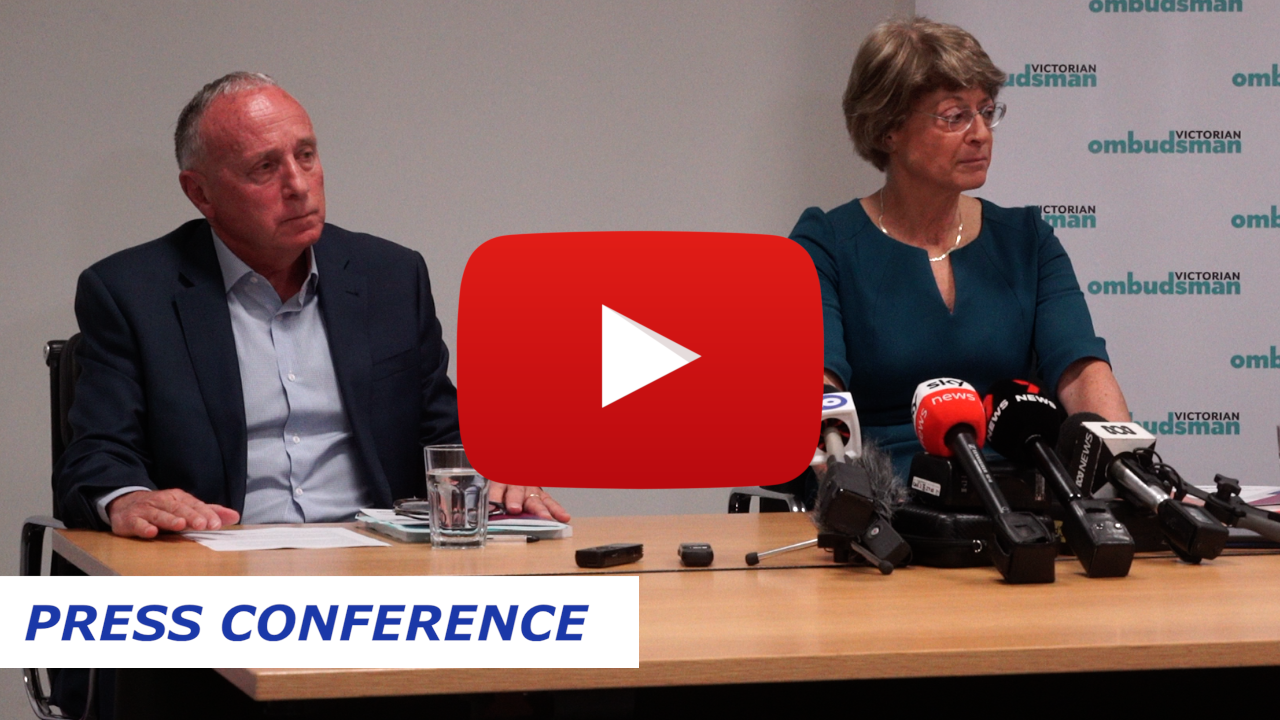 This report sets out the findings of the first ever joint investigation conducted by IBAC and the Victorian Ombudsman. We agreed to conduct this together following two referrals: from the Attorney-General to IBAC, and from the Legislative Council to the Ombudsman, following allegations of 'branch stacking' involving misuse of public funds by certain Moderate Labor members of Parliament.

We emphasise that allegations of branch stacking on their own are not matters for integrity agencies. Our investigation was into how branch-stacking resulted in the alleged misuse of public funds for party-political purposes and subversion of parliamentary standards and processes.

Many people saw the evidence which emerged in public hearings last year. But in addition to the 7 public hearings, IBAC also held 26 private hearings, and the investigation team conducted voluntary interviews and reviewed many thousands of pages of documentary evidence.

The evidence, public and private, painted a compelling picture of jobs on the public purse according to factional loyalty and widespread misuse of public resources for political purposes.

Some electoral officers, ministerial staff and aspiring MPs were plainly uncomfortable with the factional work they were being asked to do but told us they felt powerless to resist. There was nowhere to complain.

Others were willing participants in what they described as a longstanding cultural norm, where branch stacking was so embedded that the necessity of the practice, and the misuse that went with it, was simply taken for granted.

Our report illustrates a catalogue of unethical and inappropriate behaviour and concerning practices, and the environment in which such behaviour was able to flourish.

They range from the hiring of unqualified people into publicly funded roles; using those roles to support factional work; nepotism; forging signatures; bullying behaviours; and attempts to interfere with government grants to favour factionally aligned community organisations who, in some cases, failed to use the funds as intended.

These factors and the nature of factional power struggles tend to confirm that misuse of public resources was not confined to one faction, and it was generally accepted in evidence that the culture allowing branch stacking to continue for so long gave rise to the real risk of corruption.

But proof of the broader problem was more anecdotal.

The evidence of branch stacking was not limited to one faction. But the evidence of misconduct only concerned the Moderate Labour faction of the ALP. We had no specific evidence that allowed us to determine the extent of misuse by any other faction or make further findings of misconduct.

We concluded that two Members of Parliament breached one or more elements of the Ministerial Code of Conduct and the MPs’ Code of Conduct. While we saw evidence of disturbing practices engaged in by staff, most of who knew what they were doing was wrong, primary responsibility rests with the MPs for whom they worked and their factional leaders.

The unethical culture that was such a feature of this investigation, whether as an explanation or excuse for bad conduct, lies at its heart. Some MPs were perpetrators; others presented as passive victims of that culture.

Above all, we criticise a legislative framework that provides few, if any, consequences for abusing public resources and that allows such conduct to continue unchecked.

We have carefully considered whether the identified misconduct constituted criminal offending which should be referred to the Director of Public Prosecutions. Ultimately, while we consider the conduct to be egregious, the difficulties in proof and the state of the law are such that we cannot recommend prosecution.

The investigation did not uncover examples of what might be termed traditional or ‘black’ corruption, in which a public decision maker dishonestly exercises their power for their own private gain or reward.

The investigation was firmly within the zone of ‘grey’ or ‘soft’ corruption in which decisions are made and rules are bent or broken for the benefit of a decision maker’s friends, political organisation or networks.

Grey corruption is characterised by questionable behaviour and decision making involving a breach of integrity standards that does not necessarily amount to criminal conduct. However, its effect on public confidence in democracy and its institutions is deeply damaging.

During the investigation, we also received evidence that Members of Parliament had breached various ALP rules, including rules against a person paying the membership fees for any person other than a family member. Although such breaches were an integral component of branch stacking and formed part of the background to this investigation, breaches of internal party rules are outside the jurisdiction of IBAC and the Ombudsman. Accordingly, we make no findings about them.

It will now be a matter for Parliament’s Privileges Committees to decide whether the MPs have wilfully brought discredit upon Parliament.

But the case for meaningful reform is now both compelling and urgent.

Allegations of bad behaviour by our elected representatives still generate a large number of media headlines. It is discouraging that so little Parliamentary time – across parties and houses of Parliament - has been devoted to improving ethical standards.

This investigation has exposed the continuing weaknesses of the Victorian parliamentary integrity model, especially the absence of an effective framework with which to support and enforce standards.

Trust in our politicians is declining and will decline further if real action is not taken.

Such action must include the clearest standards reflected unambiguously in codes of conduct; effective controls; and the cultural alignment to support those standards and controls.

We propose a new Parliamentary Ethics Committee, and an independent Parliamentary Integrity Commissioner, who would investigate breaches of parliamentary ethical obligations. A new framework would include sanctions for breaches of standards and regular audit of MPs’ use of allowances.

Such a framework draws on the best Parliamentary integrity models elsewhere in Australia and around the world and would give Victoria the chance to lead the country once again.

This is not the first scandal to damage public confidence in our elected representatives, and if the opportunity for reform is not seized and acted upon, it will not be the last.

Despite the findings of this report, we believe most Members of Parliament, whatever their political affiliation, genuinely seek to advance the public interest. We encourage them to demonstrate this by supporting these reforms.