If you think you’ve been treated wrongly by a Victorian public organisation, we can see if your problem can be fixed. *Due to temporary service delays in receiving and processing our hard copy mail, we kindly suggest contacting us via phone or our online complaint form.

Start an online complaint
On this page:

Who can I complain about?

We can look into:

We cannot look into:

Find the right Ombudsman for you

What is the complaint process?

We deal with most complaints within 30 days. Complaints that are complex can take longer before we make a final decision.

Step 1: Tell us what has happened

We receive your complaint and acknowledge it within 5 business days.

Step 2: We look into your complaint

Many complaints can be fixed by us contacting the relevant organisation.

Step 3: We may look into your complaint further

We'll see if we can resolve your complaint and if not whether we should investigate. We only investigate less than 10% of complaints we receive.

Learn more about the investigation process

Step 4: You receive an outcome

We reach a decision and contact you about the outcome. 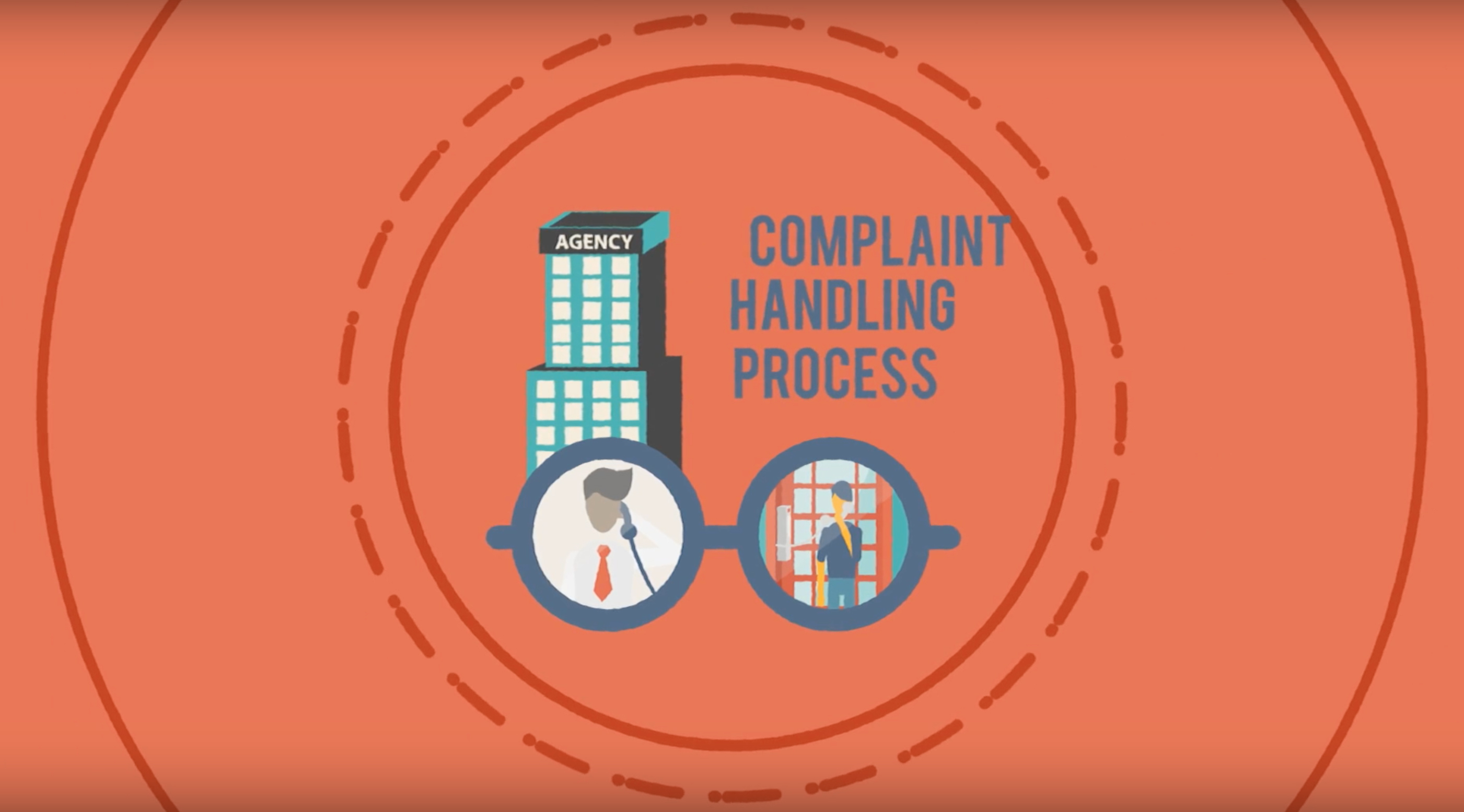 This video contains a series of animations accompanied by a voiceover.

Narrator: Welcome to the Victorian Ombudsman. We deal with complaints about more than 1,000 state and local government agencies, from councils and prisons to statutory bodies, like VicRoads and WorkSafe.

The Ombudsman logo is replaced by text: “We deal with COMPLAINTS”.

As the camera pans out, the text becomes surrounded by graphics indicating the types of complaints and agencies the Ombudsman can deal with. These include a town hall, prison cell, Parliament House, a school, vehicles, driver’s licence, pets, trees and roads.

Narrator: Our role is to make sure their decision-making is fair.

Narrator: In weighing that up, we look at the circumstances surrounding a complaint, including what the law is and the agency’s policies and procedures.

A complaint appears in the centre of the screen. Typical questions we ask pop up around it:

On either side of the complaint, appear the other factors we look at – a gavel to represent the law, and documents titled ‘policies’ and ‘procedures’.

Narrator: If you think you’ve been treated unfairly, the first step is to try and resolve your problem with the agency.

Narrator: If that doesn’t work, you can contact us.

A smartphone, computer and letter appear, illustrating the different ways to contact the Ombudsman’s office.

Narrator: You don’t have to be over 18, and you can remain anonymous.

An age scale and text highlight that a person of any age can contact the Ombudsman anonymously.

Narrator: In some cases, another person can complain for you.

Graphics then show a person making a complaint on behalf of someone else.

Narrator: You can complain to us about something an agency did or didn’t do, or a decision it made.

Narrator: For example, if you made a complaint but the agency is taking months to respond …

An agency responds in August to a complaint made in January.

Narrator: … or the agency says they’ve fixed the problem but you’re still not satisfied …

A person looks dissatisfied with the agency’s response to their complaint.

Narrator: … or they’ve made a decision that you think is unfair.

The agency responds: “THIS IS OUR DECISION!!!”, which makes the person feel lower than them.

Narrator: You can also come to us if you feel an agency has infringed your human rights.

A person runs past an arrow pointing in the direction of the Victorian Ombudsman. As they run past the text: “HUMAN RIGHTS”, it shatters into tiny pieces. The person keeps running directly into a telephone booth which is labelled ‘Victorian Ombudsman HOTLINE’.

Narrator: We understand you may be feeling frustrated by the time you speak to us.

Narrator: Try to explain your complaint in a few key points, including what happened and when.

The person in the hotline booth makes a call, which is answered by an employee at the Ombudsman’s office. Text appears to highlight the key points to include when making a complaint:

Narrator: Tell us what you’d like to happen and remember to send us relevant documents.

A stack of documents appear, including the complaint, the agency response, and another relevant document.

Narrator: We’ll assess your complaint and decide on a course of action.

Magnifying glasses scan across the document, depicting the complaint being assessed by the Ombudsman’s office.

Narrator: If we think we can help, we’ll try to resolve the matter informally and, in some cases, we investigate further.

Narrator: When we’ve finished, we might make recommendations to the agency on how it can improve.

Narrator: In some cases, we’ll present our findings to Parliament, so the public knows what we’ve said, and the lessons can be learnt by the whole state government.

The recommendations are sent to Parliament House and become available to the public.

Narrator: By helping government agencies to improve, we create a better experience for everyone.

The animation shows that “by helping government agencies improve”, a large network of people benefit.

Narrator: We don’t deal with complaints about the police, courts, politicians or employment issues.

Crosses appear over a police hat, courthouse, politician and tie to illustrate the types of complaints and organisations that are outside the Victorian Ombudsman’s jurisdiction.

Narrator: There are some other limits on what we can do, too – for example, if your complaint is very old or there is another body that can deal with it.

Graphics illustrate the further limitations on the Ombudsman’s jurisdiction:

Narrator: If you’re not sure what to do next, get in touch and we’ll try to point you in the right direction.

A question mark is replaced by the text: “GET IN TOUCH!”.

Narrator: You can find out more about where we can and can’t help on our website.

Narrator: Otherwise, you can email, call, write to us or make a time to come in and see us.

“Head to www.ombudsman.vic.gov.au for more details”.

The music comes to an end and the screen dips to black. End. 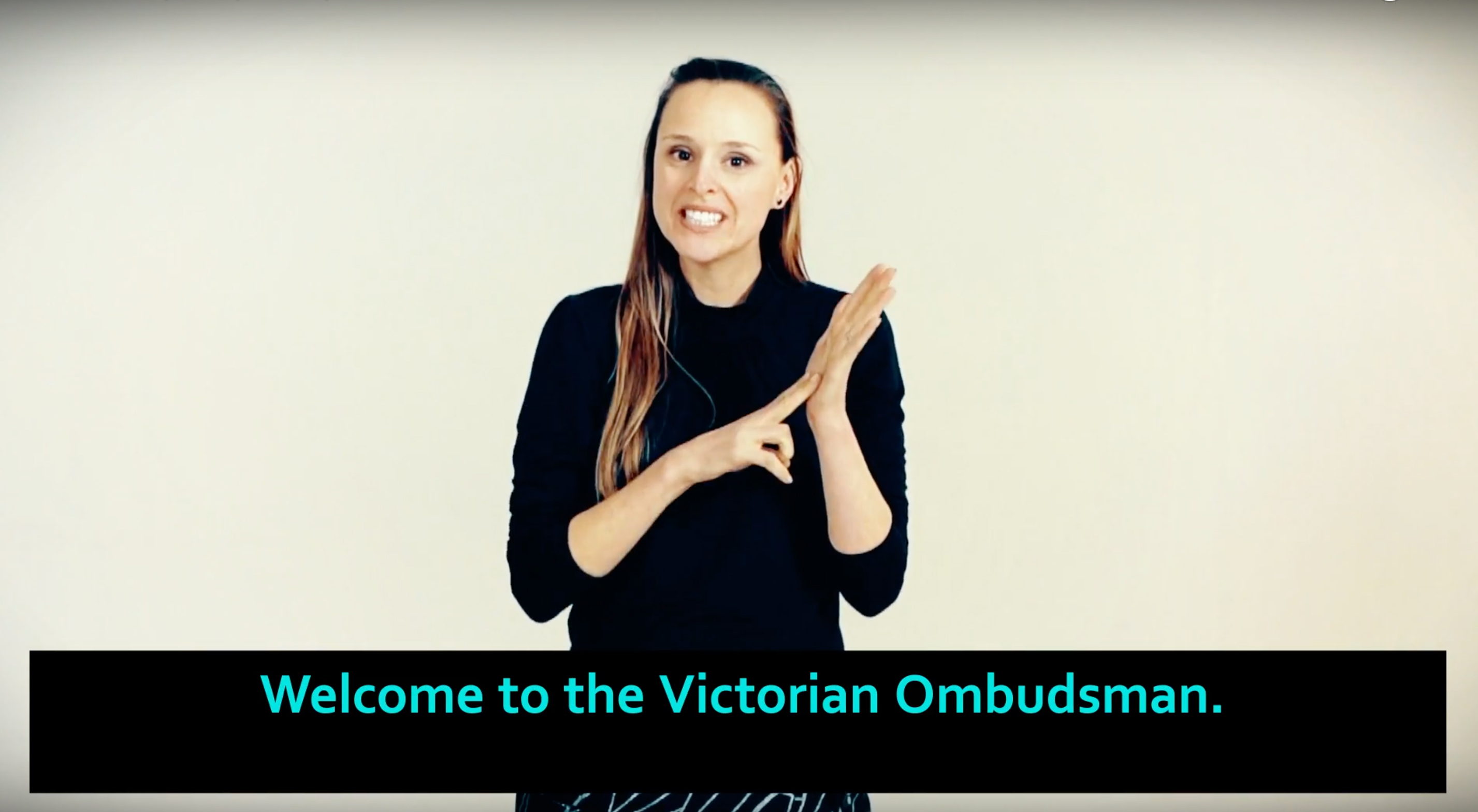 Read about common complaint types, our role in cases and browse some related case examples.

Read about similar cases to yours and find out how we might handle your complaint.

Nothing. We provide a free service to people who make a complaint to us. Victorian taxpayers fund our service.

It is usually best to put your complaint in writing. This is particularly true if you are dealing with a large organisation.

If you write, someone will have the job of answering your letter. And your complaint is more likely to get to the right department or person.

If you do phone the organisation

You may be asked to put your complaint in writing. This is likely if your matter is complicated or there is a significant history to it.

Send your email/letter to the organisation's complaint-handling area, if there is one.

If you are unable to identify such an area, mark your email/letter to the attention of the head of the organisation (eg the CEO of a Council).

You should be clear and to the point. Summarise in a couple of sentences what your complaint is about. Don't give unnecessary detail.

Your email/letter should be set out in a logical order and include:

Tell the organisation what you need

Explain what action you think could resolve your problem. This will give them a chance to fix a mistake or an omission.

Make sure your requests are reasonable.

If your request is realistic and within the power of the person you are writing to, you are more likely to get a result.

Four weeks (28 days) is usually a reasonable length of time in which to receive an answer to a non-urgent complaint.

It is important that you keep copies of all the emails/letters you send and receive, as well as details of all phone calls.

If you end up making a complaint to us, we will want to see evidence of how they handled your complaint.

If nothing happens, call the organisation to check on the progress of your complaint. If they are not able to provide you with an update, then write again or contact us.

Dissatisfied with the response?

If you are unhappy with the outcome, ask the organisation what appeal rights are available to you.

After this process, if you are still unhappy about the outcome, complain to us. Or if the organisation has not responded in a reasonable time (say within 28 days), complain to us.

Have you made a complaint to the organisation already?

It's always better to see if they can resolve your problem first.

If you're not happy with their response and the issue continues to affect you, we may be able to help.

It's helpful to have a few things ready before you start your complaint with us. You will be asked for the below information in our online form or if you call us:

No. You can make a complaint anonymously. But this means we won't be able to get in touch with you for more details or to let you know the outcome of your complaint.

If you're making a complaint and you give us your name and contact details, we may forward them on to another person or organisation. This would be for the purposes of investigating and considering your complaint. If you do not want your name or details passed on, you should request this at the time of making your complaint.

If you're reporting improper conduct , your identity is kept confidential.

Yes. But only with their permission.

We will ask you for their contact details. We will contact them to make sure they are happy for you to act on their behalf. You will then be responsible for updating them on any progress or informing them of the outcome.

Find out more about our service standards in our Service Delivery Charter.

We are able to fix some complaints by contacting the organisation involved.

The organisation may agree to actions such as:

If your complaint cannot be easily resolved, sometimes we will look into it further and see whether we should investigate. We only investigate less than 10% of complaints we receive. Learn more about the Investigations process.

There are some complaints that cannot be resolved and that we decide not to investigate. If we do not intend to take further action on your complaint, we will explain why. Where possible, we will provide you information about other available options.

We need to make sure we use our resources to the best advantage of all Victorians.

This means we may not look into your complaint if, for example:

If we do not intend to take action on your complaint, we will explain why. Where possible, we will provide you information about other available options.

Politicisation of the Public Service submissions

The period for submissions has now closed. If you would like to contact us about a submission that you have made or to make an enquiry about the investigation please email submissions@ombudsman.vic.gov.au