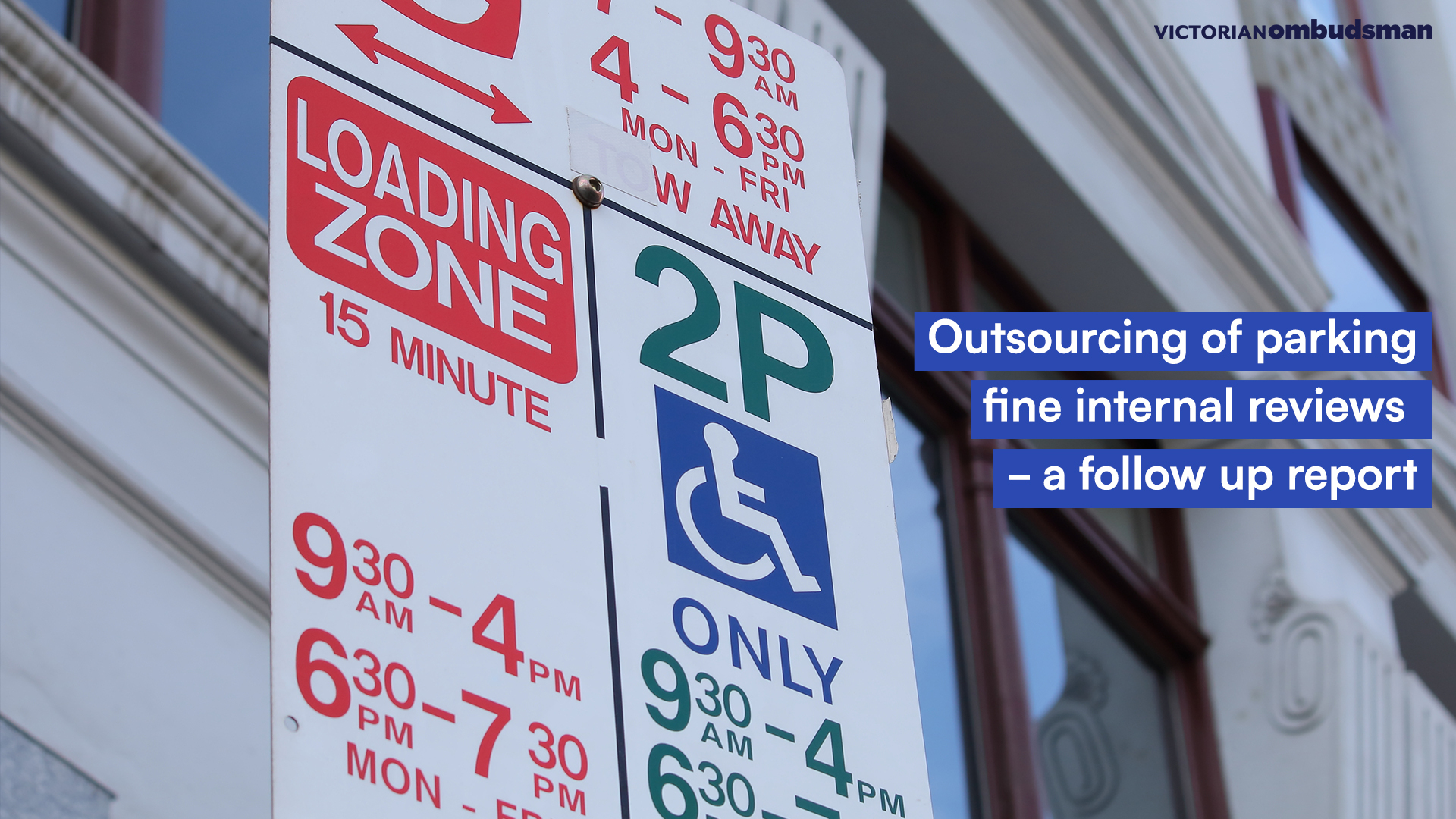 A follow up investigation into the outsourcing of parking fine reviews has identified a further 5 Victorian councils, a university and a government body acting contrary to the law.

This will lead to more than 17,400 motorists now having their fines overturned.

Councils and agencies who have or will set-up refund schemes are these:

In February last year, I tabled a report about parking fines internal reviews and exposed the practice of outsourcing parking fines reviews to private contractors.

After the report came out, Glen Eira, Stonnington and Port Phillip councils set up refund schemes to refund more than 204,000 fines.

If you have challenged a fine’s legitimacy or fairness during the last 10 years at any of these councils, I urge you to contact them.

If you continue to have issues with your refund, please contact my office.

The Honourable the President of the Legislative Council

The Honourable the Speaker of the Legislative Assembly

Pursuant to sections 25 and 25AA of the Ombudsman Act 1973 (Vic), I present to Parliament my Outsourcing of parking fine internal reviews – a follow-up report.

Tens of thousands of people have been affected by this saga, and I am pleased that all agencies concerned have now agreed to set up refund schemes.

Every so often, I table a report suspecting what we discovered during our investigation is just the tip of the iceberg. This has again proven to be the case with the outsourcing of internal reviews of parking fines.

In February 2020 I tabled a report about parking fines internal reviews – when motorists challenged the fairness or legitimacy of a fine – in three Melbourne councils. I concluded then that a longstanding practice of outsourcing reviews appeared to be contrary to law. Before my investigation, two councils had acknowledged outsourcing their reviews and decided to refund affected motorists. Following my investigation another three councils agreed to set up refund schemes, although they did not agree the practice was unlawful.

I felt it was in the greater public interest to swiftly conclude my investigation into the three councils than to widen it, but said I would be following up with any other agencies we identified which might have similar practices.

This report reveals that of 19 agencies across Victoria we followed up with, seven had outsourced their internal reviews in ways similar to those discussed in my 2020 report. Four had already announced refund plans. One had previously invited motorists to contact it with any concerns and will make a further announcement. Two had not announced plans at the time we provided a draft of this report but have now agreed to, while one continues to assert their view that its practices were lawful.

Fines are part of life and if people do the wrong thing they should be fined – but it needs to be done properly, fairly and in accordance with legislation.

People also have the right to have their fines reviewed by the agency making the decision. What my investigation found in 2020 was that thousands of motorists had not been afforded the right decision-making in the appeal process – which had been contracted out in a manner that appeared to be contrary to law.

Whether or not they claim past practices were lawful, all agencies queried say they now make these decisions themselves. They should also, as I recommended in my last report, make clear in their letters to people seeking a review of their fine who the decision-maker is. Decisions should be transparent, as well as fair.

Tens of thousands of people have been affected by this saga, and I am pleased that all agencies concerned have now agreed to set up refund schemes. In some cases, better late than never.

The purpose of this report

There are over 100 agencies in Victoria that can issue fines to motorists who break parking laws. Local councils issue most of these fines. Some State Government agencies can issue fines as well, including universities, TAFEs and public hospitals.

The Infringements Act 2006 (Vic) gives motorists the right to appeal parking fines by asking for an ‘internal review’.

Most councils and agencies conduct internal reviews themselves. However, some get help from private contractors.

Private contractors – what is and is not lawful?

Department of Justice and Community Safety legal advice states that for the purpose of council parking fines, a private contractor cannot be an enforcement agency. In practical terms, this means:

The Ombudsman’s February 2020 report recommended the Department of Justice and Community Safety seek amendments to the Infringements Act to clarify who can conduct internal reviews of parking infringements, for the avoidance of doubt.

In the meantime, the Department has changed its guidelines for enforcement agencies. They now clearly state:

All enforcement agencies must make their own internal review decisions, and must not outsource this function to private contractors.

Who else is refunding fines?

This investigation has its origins in public concerns about the development of land within their community.