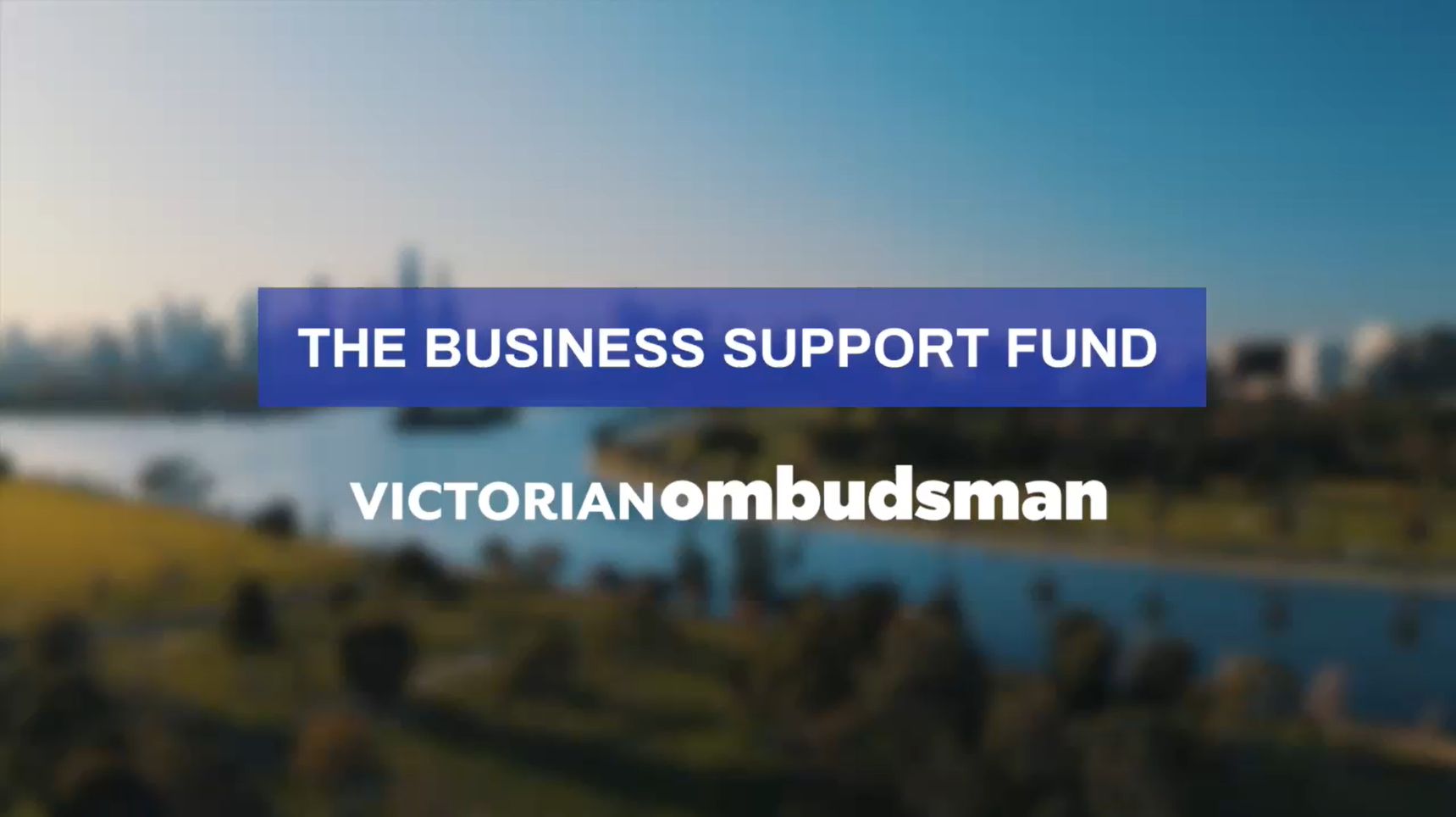 The Covid-19 lockdowns fell like a hammer blow on small businesses. To the Victorian Government's credit, it swiftly announced an economic survival package to provide 10,000 grants to eligible small business owners. The fund was established and scaled at speed but soon after my office was inundated with complaints. I received more than 1,100 complaints about the fund. There was desperation in people's voices. They were counting on the grant to pay bills, rent, wages to survive. Joanne: 'The problem was this letter that I'd received with the link, that I hadn't used it and that's why they thought that I'd put in two applications which I hadn't and so they were difficulties that you know you knew you had to have the information right, but to find your way through the computer system in order to do it was horrific.' Andrew: 'At first it was pretty difficult to wade through the internet and look at all the forms and work out whether you were eligible or not and in our case a spelling mistake in an email address meant that it went all wrong.' Good intentions got lost in translation. Business owners were denied the grant because their applications remained in draft awaiting further information when the deadline expired, there were typos on their application, they provided information through the wrong link and there were delays. The department had nine days to implement the program but it missed some of the key checks and balances that would have picked up the inevitable flaws. Many complaints could have been resolved without coming to my office, had the department been more reasonable at the time. Leanne: 'Well I'm a small business person and I'm a single income earner and that ten thousand dollars would have helped me immensely so we had to sort of do some research on it and finally I got the form filled, it out in May, I received an email a few weeks later saying that they couldn't read the attachments that they asked for and rang and got nowhere so I was getting nowhere and I said "can't you take my number?" and "no it's just shut down and it's too late" is what I got.' To the department's credit, it engaged constructively with my office from the outset, resolving many complaints and improving their processes along the way. Many people received their grants while the investigation was ongoing and now, as a result of my investigation, about twelve thousand business owners may be able to reapply to the fund - that's potentially over one hundred million dollars going back into the small business community. Sometimes it takes the nudge of the Ombudsman's elbow to encourage public servants to do the right thing. In the end that they do the right thing is what matters.

About 12,000 struggling businesses may be entitled to up to $120 million after a Victorian Ombudsman investigation into a COVID-19 business fund.

The Department of Jobs, Precincts and Regions has assured the Ombudsman it will reopen the Business Support Fund for eligible businesses owners who were denied the $10,000 grant.

Many of these denials were because, unbeknown to the business owners, applications remained in draft awaiting further information when the deadline expired. More people were unfairly denied a grant on other grounds such as typos on their application, or information being provided through the wrong link.

The Department’s call centre, which was initially staffed with five people, could not handle the volume, and while it later grew to more than 500, was not given access to the Department’s case management system.

The Department set up the Business Support Fund, aimed at providing critical and fast financial support to thousands, in nine days.

Cracks soon started to appear, and the Victorian Ombudsman was inundated with complaints, prompting an investigation into what went wrong. The Ombudsman received more than 1,100 complaints about the fund.

Tabling the Investigation into the Department of Jobs, Precincts and Regions’ administration of the Business Support Fund report today, Victorian Ombudsman Deborah Glass made several key recommendations including inviting almost 12,000 businesses whose applications had been rejected to reapply to the fund.

Ms Glass said while the Victorian Government should be commended for setting up what was viewed as a lifeline for some businesses fighting to stay alive, its execution and how it was managed left much to be desired.

“There was desperation in people’s voices, they were counting on a grant to pay bills, rent, wages - to survive.

“Despite the stress and anxiety caused by COVID-19, in an environment where their businesses were being destroyed, people were being penalised for their honest mistakes.

Ms Glass said the Department unreasonably refused some applications, refusing to reassess them even after the Ombudsman highlighted the harshness of its decisions.

“Good intentions got lost in translation. The aim of the fund was laudable, to support a hugely vulnerable cohort affected by lockdown. But administering it inflexibly undermined its very purpose. The people were forgotten in the process,” she said.

The Ombudsman’s investigation found the Department’s processes failed to recognise that many of those applying for grants were facing severe stresses, may not have computer or language skills, or were otherwise more than usually vulnerable to human error.

Time constraints, the complexity of the application process and the inflexibility of the Department’s initial decision making also confused and frustrated many business owners.

Case studies are available to talk to media