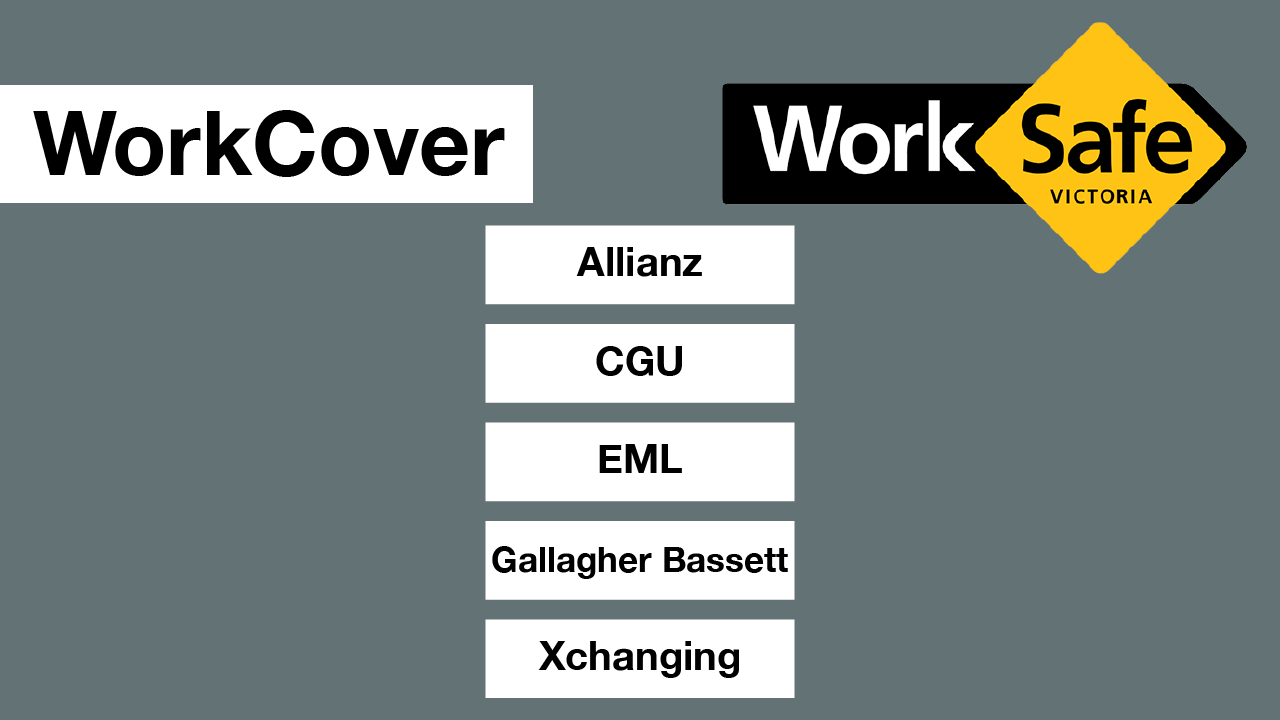 Victorian Ombudsman Deborah Glass appears in mid-shot, standing indoors in front of a large window overlooking trees and a busy street in Melbourne’s CBD. She is speaking directly to camera.

Glass: This is the first time in my five years as Victorian Ombudsman that I’ve investigated the same issue, twice.

The opening scene fades to a slide containing the logo of WorkSafe Victoria, and the text “WorkCover” side by side at the top of screen.

Glass: Victoria’s workers’ compensation scheme, WorkCover, provides a range of entitlements to people who are injured at work.

Glass: The organisation responsible for the scheme, WorkSafe, outsources the management of injured workers’ compensation claims to five agents.

The names of five companies that provide workers’ compensation – referred to as ‘agents’ – appear on screen below the WorkCover and WorkSafe logos:

The slide fades to footage of the Ombudsman sitting at a table in her office reading a hard copy of her 2016 report into the same issue.

Glass: In 2016, I tabled a report into how agents were handling complex claims. These mostly involved workers with long-term injuries who’ve been off work for two years or more.

The footage fades back to the mid-shot of the Ombudsman speaking directly to camera.

Glass: My 2016 investigation concluded that while the overall system was not broken, it had failed some particularly vulnerable people.

Glass: While WorkSafe and its agents have made some changes since then, my office continues to receive hundreds of complaints about them.

The following text appears on screen:

Glass: Having now re-investigated the situation, I can say categorically that not enough has changed.

Glass: If anything, the evidence suggests the impact of my last report was to drive practices underground.

An image of two internal emails appears on screen. The first email requests the increased use of a doctor whose assessments resulted in the termination of two workers’ compensation claims. The second email below is a response to this sent on 2 May 2018, the visible part of which states “Everyone delete this email now”.

Glass: From the evidence in this report, my last investigation only scratched the surface.

The image of the second email comes to the forefront of the slide, highlighting the text “Everyone delete this email now”.

The slide fades back to the mid-shot of the Ombudsman speaking to camera.

Glass: The system is failing to deliver just outcomes to too many people. Agents continue to make unreasonable decisions. The dispute resolution process can be time-consuming, stressful and costly, and WorkSafe is too often unwilling or unable to deal.

The shot fades to footage of people crossing the road towards the main entrance of Flinders Street Station in Melbourne’s CBD. The camera moves towards the Station amongst the crowd.

The footage fades back to the mid-shot of the Ombudsman speaking to camera.

Glass: The emotional toll is clear. These cases involve people’s lives. The cost – not only to them and their families, but to society as a whole – should not be forgotten.

Glass: We uncovered a range of concerning practices.

A slide appears with the text: “Unreasonable decision making by agents”.

“These five companies are all private companies… and the maximisation of profits is their primary aim. Their secondary aim of course is fair and just compensation to injured workers.”

“I think that they’re unfairly using that part of the legislation to bully somebody into going back to work when their own doctor is saying ‘look you can’t’.”

Glass: We found unfair return to work practices, including agents requiring workers to participate in occupational rehabilitation at inappropriate stages of their recovery.

A slide appears with the text: “Unfair return to work practices”.

A quote from an Occupational Physician appears on screen:

Glass: Cases which resulted in the termination of a worker’s entitlements were considered wins by agents. Staff openly discussed the amount of money these terminations would make for the business.

A slide with images of three internal emails from EML sent on 10 April 2018 appears. Each email states, in order:

“DO I get a portion of that? Haha”

“Yep, it’s been deposited into your offshore Cayman Island account… [Worksafe, just joking if you are auditing emails, please don’t put me in the 2022 ombudsman report]”.

Glass: In many cases, WorkSafe failed to provide proper oversight of agents.

The emails fade to a slide containing the text: “WorkSafe failed to provide proper oversight of agents”.

Glass: Many of the decisions we saw were not only unjust, unreasonable and wrong. Some were downright immoral and unethical.

Glass: I have made 15 recommendations to the government, and to WorkSafe, all of which they’ve accepted.

The shot fades to a slide with the heading “15 recommendations” at the top and the following text below:

“The Victorian Government has agreed to:

Review whether agents or someone else should be managing complex claims; and

Introduce a new dispute resolution process which allows for binding determinations, and saves workers the cost of going to court.

A further 13 recommendations have been made to WorkSafe.”

Glass: It is clear that the balance between financial sustainability and fairness has tilted too far away from supporting injured workers.

Glass: Nothing short of wholesale change will bring back the humanity the system needs.

The shot fades to a closing screen containing the text: “To read the report, or for more info: www.ombudsman.vic.gov.au/Worksafe2 . Royalty free music from Bensound.”

“The system is failing to deliver just outcomes to too many people," Ms Glass said,

"WorkSafe agents continue to make unreasonable decisions, the dispute process can be time consuming, stressful and costly, and WorkSafe is too often unwilling or unable to deal," she said.

Revisiting an issue she first investigated in 2016, Ms Glass has today tabled in the Victorian Parliament her 18-month long WorkSafe 2: Follow-up investigation into the management of complex workers compensation claims.

“I said in 2016 these cases involve people’s lives, and the human cost should never be forgotten; that human cost continues to this day,” Ms Glass said.

“From the evidence in this report it would appear that my 2016 investigation only scratched the surface.

"Many of the decisions and actions we saw were not only unjust and wrong. Some were downright immoral and unethical.”

Her investigation found evidence of agents:

Ms Glass found that WorkSafe had failed to hold agents accountable for poor decisions, shirking from requiring agents to overturn decisions that had failed its own audits.

She said while her 2016 investigation had resulted in some improvements, it also appeared to have driven some practices underground.

“Agent staff were told to be careful what they put in writing – in case the Ombudsman sees it. Staff were advised to use words like ‘entitlement reviews’ in their emails rather than ‘termination’,” she said.

“But while this meant less overt evidence of decisions being made for financial incentives, this was the only logical explanation for some of them: agents who came to conciliation not prepared to conciliate beyond a derisory sum; maintaining those decisions knowing they would be overturned by a court, on the basis that many workers would simply give up.

“The financial viability of the scheme is imperative; but the balance between financial sustainability and fairness for injured workers has tilted too far away from the latter.” Ms Glass said. “It is time for the change that makes a difference, and I welcome the government’s acceptance of this.”

Ms Glass has made 15 recommendations to the Victorian Government and WorkSafe, all of which have been accepted.

The government has agreed to:

Case studies describing the experiences of 51 injured workers and their families are included in the Ombudsman’s report. The case studies include: