MPs cleared of wrongdoing in invoice fraud matter; but time for MPs to stop certifying their own expenses 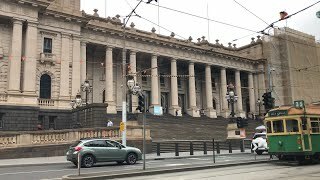 Victorian Ombudsman Deborah Glass appears in mid-shot, standing in front of a public bench near the Parliamentary precinct in Melbourne’s CBD. She is speaking directly to camera.

Glass: Last year, I was asked by Parliament to investigate matters concerning current and former Liberal and National MPs’ invoices paid by the Department of Parliamentary Services.

The opening scene fades to a shot panning down a letter from the Speaker of Victorian Parliament’s Legislative Assembly, referring matters for investigation to the Victorian Ombudsman under s 16 of the Ombudsman Act 1973 (Vic).

Glass: Essentially, I was asked to look into whether the 40 Members of Parliament knew or ought to have known whether the goods and services referred to in the invoices were provided adequately, or at all, and whether they were charged at a fair commercial rate, or an inflated rate.

An image of a document attached to the referral letter appears, containing details of the matters referred. A snapshot of paragraphs (3) and (4) of the attachment come to the forefront of the slide, highlighting a request for the Victorian Ombudsman to investigate:

(4) whether members certifying as to the accuracy of the invoices knew, or ought to have known, whether the goods and services were provided adequately, or at all.

Glass: These matters related to former Liberal State Director Damien Mantach, who was convicted of fraud in 2016.

Glass: I was also asked to investigate whether the MPs or the Liberal Party received any kickbacks or levies from the deal struck between Mr Mantach and a mail distribution company.

A slide appears containing an image of an annotated invoice from Melbourne Mailing Pty Ltd with the text: “Original invoice”. On a new slide, an image of the same invoice that has since been altered appears with the text: “New (inflated) invoice”. The slides compare the invoice documents, indicating that rates had been inflated by an additional $837.75.

Glass: In this investigation, I found that the MPs did not know, and could not reasonably have known, that the goods and services in the invoices had been charged at an inflated rate.

Glass: Parliament also asked me to investigate whether the Member for Lowan had requested invoice dates to be altered to circumvent Parliamentary rules.

The shot fades back to the image of the document attached to the referral letter. A snapshot of paragraph (7) of the attachment comes to the forefront of the slide, highlighting a request for the Victorian Ombudsman to investigate:

(7) whether any invoices were falsified by Liberal and National MPs, in particular the Member for Lowan, to obtain payment for goods, services or advertising, bypassing the oversight rules of the Department of Parliamentary Services.

Glass: Despite the misleading impression given by an email that triggered the referral, we found no evidence of any wrongdoing.

An image of a redacted email sent on 2 July 2018 appears, listing the subject matter as: “Emma Kealy K031”, referring to the Member for Lowan. The email requests that November bookings for Emma Kealy have October dates on the invoices, as due to government rules around upcoming elections “they are not allowed to process anything with November dates on!”.

Glass: In fact, my investigation found no culpability on part of any of the named MPs. But the fact that Parliamentary funds could be diverted by Mr Mantach in this fashion reflected poorly on all involved, and indeed on the whole system.

The shot fades to footage of Victoria’s Parliament House. As the camera pans the building, a tram, cars and people pass by.

Glass: Once the fraud was discovered, the Liberal Party repaid more than $175,000 taken by Mr Mantach from public funds, to Parliament.

The panning image fades back to the mid-shot of Victorian Ombudsman Deborah Glass speaking directly to camera.

Glass: But whether or not an investigation involving MPs’ expenses condemns or exonerates, the public should be concerned about the number of such allegations being made.

Glass: I’ve recommended to Parliament that there be a better system of scrutiny, with Members no longer able to certify their own expenses.

The Presiding Officers of Parliament change the rules so Members are no longer able to certify their own expenses.”

Glass: Such a system would provide greater certainty for members, reduce the risk of further scandals, and help rebuild public confidence about how public money is spent.

The shot fades to a closing screen containing the text: “To read the report, or for more info: www.ombudsman.vic.gov.au/inflated-invoices ”.

The text fades to black and the music fades to silence. End.

Forty current and former Liberal MPs did not know - and could not reasonably have known - of invoice fraud committed by former Liberal State Director Damien Mantach, Victorian Ombudsman Deborah Glass has found.

Ms Glass was asked by Parliament’s Legislative Assembly to investigate the MPs’ knowledge of, and involvement in, the fraud undertaken by Mr Mantach between 2010 and 2015.

Mr Mantach arranged for a printing and mail distribution company to inflate the invoices, with the company believing the extra money was going towards another business providing services to the Liberal Party.

Mr Mantach instead used the proceeds to fund his luxurious lifestyle. He was convicted of fraud in 2016.

“An investigation can result in exoneration and this was the case in this instance, where we found no culpability on the part of any of the named MPs,” Ms Glass said.

“They had paid for printed goods, which they received, and although detail was lacking in many invoices, at a price they could not reasonably have been expected to query,” she said.

The Liberal Party has paid back the amounts overcharged to Parliament through Mr Mantach’s fraud.

However, Ms Glass said that while only Mr Mantach was responsible for the fraud, the fact that parliamentary funds could be diverted in this manner reflected poorly on all involved and the whole system.

“The Liberal Party’s processes were plainly too weak to detect it for years, and the reliance on a single trusted individual meant insufficient checks and balances to protect both them and Parliament from the fraud,” Ms Glass said.

Tabling her Investigation into matters referred from the Legislative Assembly on 8 August 2018 report in the Victorian Parliament today, Ms Glass recommended Parliament change the rules for MPs’ expenses, so MPs are no longer able to certify their own expenses.

“Whether or not an investigation condemns or exonerates, the public should be concerned about the number of allegations being made about MPs’ expenses.

"Relying simply on the mantra that each Member is individually responsible for their expenses leaves Parliament vulnerable to the misuse or misappropriation of public funds.

“It is becoming increasingly difficult to see why the expenses of Members of Parliament should not be subject to the same robust scrutiny that applies to public servants and the broader public sector, who cannot simply self-certify their entitlements from the public purse,” she said.

“Such a system would provide greater certainty for Members, reduce the risk of further scandals, and help to rebuild public confidence about how Parliamentary monies are expended.”

Ms Glass was also asked by Parliament to investigate whether the Member for Lowan, Emma Kealy, had requested invoice dates be altered to circumvent Parliamentary rules on the use of Members’ communication budgets during election periods.

Ms Glass found no evidence of wrongdoing. “Despite the misleading impression given by an email, all parties had acted both honestly and consistently with the Members’ Guide,” she said.

Read the report here: Investigation into matters referred from the Legislative Assembly on 8 August 2018

News Credit card deception by former Warrnambool Council Manager ‘greater than had been exposed or admitted to’: Ombudsman