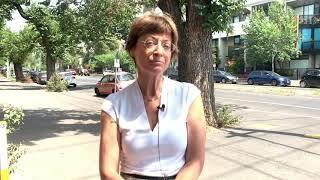 Victorian Ombudsman Deborah Glass appears in mid-shot, standing on a public street against a backdrop of cars, trees and people. She is speaking directly to camera.

Glass: Parking fines are a fact of life. If you’ve done the wrong thing, you should pay up.

Glass: But sometimes fines are issued wrongly, and in those cases, we need to know to know there is a valid appeal process in place.

The opening scene fades to a map of inner-metropolitan Melbourne, showing the outlines of 21 municipalities shaded in white.

Glass: What I have found in my recent investigation is that three councils, Stonnington, Glen Eira and Port Phillip, did not have proper internal review processes in place for about ten years.

Three municipalities of the map become shaded in three different colours, to indicate the three local councils referred to in the report. Each of their logos also appear, along with a map legend to identify them.

Glass: Motorists have a right to seek an internal review from the agency that issued the fine.

Glass: Whenever anyone appealed to these councils about a fine, a council officer should have decided on it.

Glass: Yet, these councils had outsourced their reviews to a private contractor.

The map fades to a slide with graphics showing a council building, a car and three humans. Arrows appear on screen to illustrate:

The slide fades back to the mid-shot of Victorian Ombudsman Deborah Glass speaking to camera.

Glass: A few years ago, a lawyer who specialises in fines began writing to some councils, questioning their practices.

Glass: His questions triggered a string of legal advices.

Glass: Early last year, two councils, Monash and Kingston, announced they would be refunding more than 46,000 fines incurred during the time their reviews were outsourced.

Three images of news headlines appear in the following in order:

The slide fades back to the mid-shot of Victorian Ombudsman Deborah Glass speaking to camera.

Glass: I have now investigated whether Stonnington, Glen Eira and Port Phillip’s practices were any different.

Glass: What I have found is that one of those councils had indeed outsourced its decision making, while the other two councils were, in effect, rubber-stamping the contractor’s recommendations.

Glass: For example, we discovered a council officer took one minute to approve recommendations on 107 reviews.

An image of an email sent at 10:16am on 18 March 2016 appears. It requests Port Phillip City Council’s final decision on applications to appeal infringement notices that have been reviewed by a private contractor.

An image of an email sent at 10:17am on 18 March 2016 appears, authorising the private contractor to process the infringement reviews on the Council’s behalf.

A snapshot of a report provided by the private contractor to Port Phillip City Council appears, highlighting the total number of processed appealed tickets referred to in the emails as 107.

Glass: That’s about half a second per review.

Glass: None of the three councils disclosed who was making the decisions, each of them providing a similar squiggle by an anonymous officer.

On a new slide, an example of the signature of an Appeals Review Officer is provided from each council, appearing beneath each of their logos. All three signatures look similar in style.

Glass: The three councils argue they have done nothing wrong.

The slide fades to footage of cars and people on Chapel Street in Windsor, a suburb of Stonnington.

Glass: Some said the law is complex and unclear, and lawyers have different views about what it requires.

The footage fades back to the mid-shot of Victorian Ombudsman Deborah Glass speaking to camera.

Glass: The legal issues have not been tested in court. I am not a court, but I can express my opinion, and my opinion is that the three councils acted contrary to law.

Glass: They failed to ensure accountability and transparency in their decision making.

A slide appears with the logos of the three councils on the left. A written quote from each council appears on the right of the screen:

Glass: While the three councils disagree with my opinion, as a sign of good faith, they will now be refunding people affected.

The slide fades back to the mid-shot of Victorian Ombudsman Deborah Glass speaking.

Glass: And my report puts any other agencies with similar practices on notice, that they must do the same.

The scene fades to a split screen. The left side contains the Victorian Ombudsman logo above the text “Read the full report online”. The right side contains a link to www.ombudsman.vic.gov.au and the text “Music: https://www.purple-planet.com ”.

Three councils failed to act with accountability and transparency in a matter involving the outsourcing of parking fine reviews, Ombudsman Deborah Glass has found.

Glen Eira, Port Phillip and Stonnington councils had acted ‘contrary to law’ by outsourcing the review of their parking fines to a private contractor, Ms Glass said. She said a law, introduced in 2006, strongly suggests reviews must be decided by the council that issued the fine.

Tabling her Investigation into three councils’ outsourcing of parking fine internal reviews in the Victorian Parliament today, Ms Glass said the three councils had withheld important information from affected motorists and the public.

“The legal issues have not been tested in court, so I cannot definitely determine the lawfulness of the councils’ actions,” Ms Glass said. “But I can express my opinion, which is that the three councils acted contrary to law.”

She said it stretched credulity for Port Phillip Council to argue it made its own decisions based on the contractor’s recommendations.

“The speed with which recommendations were accepted gave no hint of independent assessment,” Ms Glass said. “We discovered a council officer took one minute to approve recommendations on 107 reviews. This worked out to be about half a second per review.

“The suggestion that council officers were making genuine decisions on the evidence was simply not credible.

“It is also apparent that none of the three councils disclosed who was making internal review decisions, each of them providing a similar squiggle by an anonymous officer.”

Ms Glass said after receiving legal advice in 2016 and 2017, councils changed their internal review practices to bring decision making in-house. She said her investigation raised some fundamental issues about accountability and transparency.

“Three other councils asserted their practices were lawful, with a generic signature on review letters disguising the identity of their decision makers.

“While it was reasonable for these councils to seek legal advice, they failed to ensure transparency and accountability in their decision making.”

Ms Glass said the three councils argue they have done nothing wrong: some said the law is complex and unclear and lawyers have different views about what it requires.

While the councils disagree with the Ombudsman’s findings, they have all agreed, as a gesture of goodwill, to refund affected people.

The councils provided an estimate of the cost of refunding fines reviewed and upheld by their private contractor between the 2006 changes in the law and when the councils brought decision making in-house in late 2016 and 2017:

News Credit card deception by former Warrnambool Council Manager ‘greater than had been exposed or admitted to’: Ombudsman