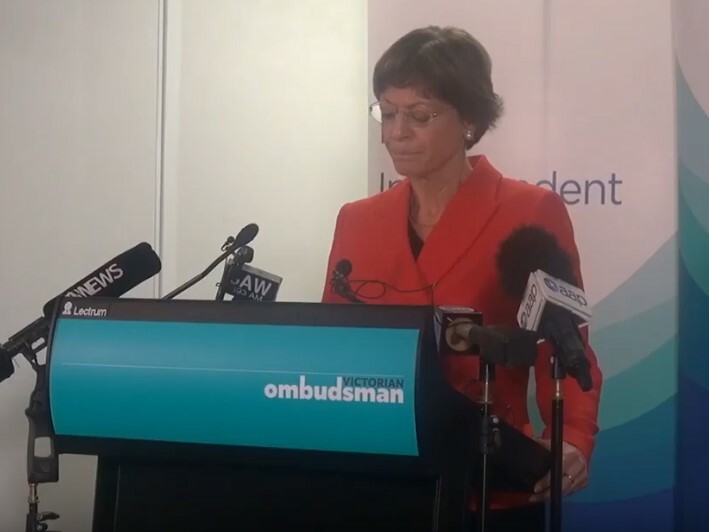 An opening slide fades from black, containing the Victorian Ombudsman logo, and the text:

The slide fades to footage of Victorian Ombudsman Deborah Glass standing at a lectern, speaking to a media conference. The media attendees are not able to be seen in shot.

Glass: This report seeks to answer questions about how a child sex offender got away with his offending for decades, in Victorian railway groups and Puffing Billy.

Glass: Robert Whitehead was convicted of child sex offences in 2015, for conduct going back to the 1960s. He died in prison later that year. He had been convicted of offences against children in 1959. Yet, he was allowed to be involved for decades with the railways, where he had access to countless innocent young volunteers. We do not know, and will never know, how many he abused.

Glass: Puffing Billy is a Victorian icon, usually thought of with nostalgic delight. But for a group of boys abused by trusted adult volunteers, the railway shaped their lives in a very different way. Our investigation spanned many years of records to try to find out who knew what, when.

Glass: How was it possible that Whitehead had such access to children for some 30 years? Why was he allowed to supervise children’s overnight working parties? How did he have leases on railway property where some of his offending occurred? Why were he and another volunteer responsible for the screening of volunteers? And how was he allowed to oversee the storage of complaints?

Glass: The victims’ voices paint a heartbreaking picture. Boys telling Puffing Billy management about sexual abuse, which was not reported to police. A mother trying to warn Puffing Billy, whose integrity was called into question because there was no record of her calls.

Glass: Their stories are finally validated.

Glass: Whitehead was a life-long offender whose abuse was facilitated by the wilful blindness, indifference or ineptitude of a succession of organisations, from Victorian Railways to Puffing Billy. Double standards prevailed for decades. Puffing Billy reported minor thefts to the police, but not allegations of child sex abuse.

Glass: A board member warned his 10-year old son about Whitehead, but not other boys. A victim was shut out, while his perpetrators remained. Time and time again, organisations protected their own reputations at the expense of victims.

Glass: The actions and inaction of people in authority is inexcusable. I commend the courage and persistence of the survivors who sought answers. Nothing can compensate for the trauma and loss of innocence experienced by victims and survivors. But at the least they deserve a public apology – that may help to provide vindication and closure.

Glass: I am pleased the Victorian Government has begun implementing the recommendations for redress. This is an indelible stain on too many childhoods.

The footage fades to a closing screen containing the Victorian Ombudsman logo, and the text:

“To read the full report visit

“Follow us on social media to find out about our latest investigations and other Ombudsman activities”.

The screen fades to black. End.

People in positions of authority at Puffing Billy and other Victorian railway groups protected the reputation of their organisations at the expense of children who were sexually abused, the Victorian Ombudsman has found.

Tabling her Investigation into child sex offender Robert Whitehead’s involvement with Puffing Billy and other railway bodies in the Victorian Parliament today, Ombudsman Deborah Glass said the failures of people in authority were monumental.

“Whitehead was a life-long offender whose abuse was facilitated by the wilful blindness, indifference or ineptitude of a succession of organisations from Victorian Railways to Puffing Billy,” Ms Glass said. “The actions or inaction of people in positions of authority, who should have known better, is inexcusable. We do not know, and will never know, how many children Whitehead abused.”

Whitehead died in prison in 2015 after being convicted of child sexual offences dating back to the 1960s. He had first been convicted of child sex offences in 1959. Immediately after his 1960 release from prison, he was re-employed by Victorian Railways, using his status as a Train Controller to groom children. He was a volunteer at Puffing Billy, a preserved steam railway in Victoria’s Dandenong Ranges, from 1961-1991.

Ms Glass said through his 30-year involvement with Puffing Billy, Whitehead had unrestricted access to children including supervising overnight working parties. Her investigation found members of the Puffing Billy Board were aware of allegations Whitehead was abusing children but never reported these matters to police, considered whether it was appropriate that he remain in the organisation, or put in place any mechanisms to monitor his conduct or restrict his access to children.

“In 1985 members of the Board knew that Whitehead was under police investigation for child sexual offences yet he was not removed until 1991,” Ms Glass said. “They failed to act on complaints or even record contacts, in one notable case punishing the 17-year-old victim by banning him from Puffing Billy.”

Ms Glass commended the courage and persistence of the survivors of the abuse, including Wayne Clarke who was the catalyst for the investigation because he wanted to know why so many organisations had failed to protect him from Whitehead’s abuse.

She said it was pleasing that the Minister for Tourism and the Emerald Tourist Railway Board (which runs Puffing Billy) had accepted her recommendation that all victims receive a public apology.

“The survivors of the abuse of Whitehead and other Puffing Billy offenders may never receive justice; nothing can compensate for the trauma and loss of innocence experienced by victims and survivors,” Ms Glass said. “But whatever redress they choose to pursue, they deserve nothing less than the verification of facts, public disclosure of truth, and public apologies.”

Two of Whitehead’s victims, Wayne Clarke and William Elms, are named in the report, with their consent. Media outlets who wish to speak to them should contact the Ombudsman’s office, who will forward any media requests to Mr Clarke and Mr Elms for their consideration.

The Ombudsman’s report may be distressing for victims and survivors of child sexual abuse. The following support services are available: